The following filenote was written by a participant observer during one fortnight’s Laceweb activities in the Atherton Tablelands region in December 1993, many of which were precursors to the Small Island Coastal and Estuarine People Gathering Celebration. This fortnight was during the time the three Down to Earth visitors were staying at Neville’s place in Yungaburra with Neville, and other Laceweb folk.

Virtually all of the children of Yungaburra (over 40) including Aboriginal, Islander and small minority children were engaged all day in preparing atmospherics for a New Year Party at Dr Neville Yeomans’ large bungalow heritage property in Yungaburra. The children painted all of the pillars supporting the house with orange fluoro-paint and made snakes out of gaffer tape stuck to the pillars that stood out black against the fluoro paint.

They also spread fluoro-whitened sand on the floor so that it glowed white at night under the fluoro lights. They also dug a channel to the atmospherics area under the top end of the house through to the back of the house that created an enchanting garden entrance by walking down earth steps in the front garden.

The earth steps to this underground entrance were to the left of the main entrance outside the front door (halfway along the balcony on the left in the photo below.)

At night this channel was also lit by fluorescent lights and had fluorescent paintings by the children draped along the earth walls.

During the day each of the children had gone home and brought back white garments that they were allowed to splatter with fluoro paint. They were stunned when they wore these around 6PM when it got dark under fluoro lights.

Present in the children’s space was hung an extraordinary 2.5 metre by 2  metre fluoro painting of outer space painted by Laceweb person Richard Clements (1951-1999), who was one of Australia’s leading contemporary painters. Richard painted what were termed ‘other worldly atmospheres’. One time he said that his paintings were depicting his feelings and emotions and that after a time it was like the paintings were painting themselves – a very Laceweb notion. 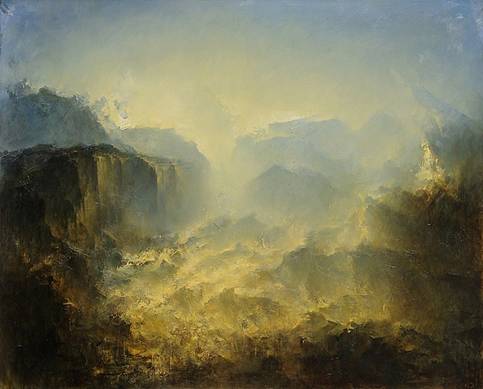 One of Richard’s paintings

The children also splattered thousands of multi-coloured small fluoro spots on two large dark tarps. These glowed like a million stars around the whole downstairs area at night.

The extraordinary atmospherics created by the children were their exclusive domain from 6PM till around 9:00 PM when they came upstairs and escorted the adults one-by- one down the steps they had carved under the front porch and down through the fluoro painting lined tunnel that adult Laceweb folk had dug under the front section of the house, into their enchanting space and music/dance area.

Approximately 150 adults and children attended this New Year’s Eve party at Neville’s place with half being Aboriginal and Islander families.

The adults were amazed at the atmospheric space created by their children.

Neville told everyone that he would provide the alcohol. Many of the attendees are heavy drinkers. Only extremely low strength beer was at the party. There was no drunkenness and many heavy drinkers said it was the first New Year’s Eve that they had stayed sober since they were toddlers and that it was their best party ever.

From this energy a children's group formed in Yungaburra that Neville called FUNPO. They would send letters to each other c/o FUNPO, Yungaburra. Yungaburra is a very small place and we had the cooperation of the local postmistress. The term FUNPO had, at one level the connotation, ‘Fun Post Office’. At a deeper level, the term stands for ‘Friends of UNPO, where ‘UNPO’ is the Unrepresented Nations and Peoples Organization based in The Hague. Australian Aborigines and Torres Strait Islanders are members of UNPO, as are other peoples and nations not represented at global forums of the United Nations.

Also during the fortnight a number of the FUNPO children were among forty who attended a four-day camp-out in an old clearing in beautiful rainforest area owned by Neville on the Baron River at Kuranda on the Atherton Tablelands. This was in a beautiful rainforest setting. We had just finished wading up a little clear stream with a bed of golden sand so that the water looked golden. Overhead, vines hung down from the green cathedral vault of the rainforest canopy. A further busload of another 35 turned up in evening for music, dancing and fireside chats. A neighbour interested in sabotaging Neville’s intercultural activity set up a sign saying the event was cancelled and this busload returned to Cairns without finding us.

Neville dreamed that this rainforest land may become an Intercultural Healing Wellbeing Centre for the SE Asia Oceania Australasia Region. Neville spoke of his mountain ash forest property at Paluma, North of Townsville, and drove me down to walk over the property in early 1964. He spoke of the Paluma property and his Yungaburra House also being resources linked to the proposed Intercultural Healing Centre. Neville had drawn up tentative handover documentation that compelled local Aboriginal and Islander groups to cooperate together as a precondition to utilising the Kuranda and Paluma properties, something they never achieved. As at September 2005 this dream had not been realized. It is understood that the Kuranda rainforest land and the Yungaburra house had been sold in settling Neville’s estate.

Another small camp-out (around 25 people) was held at Ravenshoe beside a small stream in a beautiful bush setting. Alex Dawia brought up a small bus of 14 Aboriginal people from Bama Healing Prison Diversion Program where he worked at the time. These street people had been sobering up the previous night at BAMA. The gentle playful healing energy of the camp-out had these very shy nauseous people slowly warming to each other and the others present so that change in them was very apparent to some participants – therapeutic community in action.

During the same fortnight in 1993 a series of family therapy sessions were held by Neville with an Aboriginal extended family. An old disused World War Two hospital that was built like a hanger and had a cavernous interior was explored as a possible venue for gatherings in the wet season.

This was the same fortnight that those three DTE Enablers with Neville and another Laceweb folk visited 15 possible sites for festivals and held discussions with Aboriginal people at a number of Aboriginal communities. Neville also took the three DTE people for a day at Geoff and Norma’s Therapeutic Community around an hour and forty minutes drive away via the historic little mining town of Irvinebank, and engaged in nightly sharing of stories with these DTE visitors and other Laceweb folk.

Also during the same fortnight, informal sharings of stories about what Laceweb action has been happening occurred at the monthly out-door market day in Yungaburra. Many hundreds of locals attend this market and Laceweb people take this opportunity to tell each other stories and engage in potent trivial exchanges. This market action is resonant with the Paddington Market in Sydney surrounding Neville’s first Community Mental Health Centre in the early Seventies. Trivial exchange as therapy is resonant with what Neville called, ‘home, street and rural Mediation Therapy and Mediation Counselling’, where nurturers take opportunity to use the relevant moment in everyday life to engage in healing.

Back to the top