The Evolving of the First ConFest

When Dr Jim Cairns, Junee Morosi and David Ditchburn were exploring the idea of a conference festival, the first people they held a meeting with was an urban hippy commune that lived around the Reverend Peter Holden's church in Paddington in Sydney.

The origins of this commune can be traced in part through Mangold’s photographic record of the history of the Paddington Bazaar. Mangold writes of Dr. Neville Yeomans being the primary inspiration for realizing Reverend Peter Holden's dream of 'villaging the church' in Paddington. The following two photos were taken by M. Mangold.

Neville’s suggestion was to surround the Paddington Community Mental Health Centre and the Church with a Saturday community bazaar. This was fully consistent with the Fraser House model of imbedding the Unit within the local community, as well as inviting the community into Fraser House, a therapeutic community evolved by Neville between 1959 and 1968. 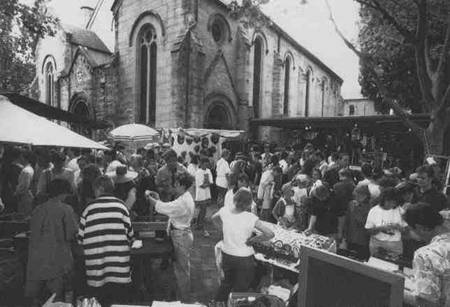 ‘Villaging’ the Church in Paddington – photo by M.Mangold - reproduced with permission

In the Photo the Vestry where Neville had his first Community Mental Health Centre is the brick building on the left. The Church is on the right. Between and around both buildings is where the Paddington Bazaar is held each Saturday morning. Adjacent the Vestry was a hall Neville used for community meetings. This is where Neville and his friends planned a series of Festivals.[1]

Neville wanted to create the public space of a small friendly village market reminiscent of the island of Tikopia in the Solomon’s Group, where everybody knows everybody and meets each other regularly. Neville wanted to replicate the healing and integrative aspects of ‘small village life’ (Tönnies and Loomis 1963) of Fraser House around the vestry in Paddington. The community mental health centre has long gone, though Paddington Market survives to this day as a Sydney icon. Every Saturday morning crowds mingle and meet at the Bazaar. Buskers entertain. The place is vibrant and alive. It still serves as a public community place for enriching community life.

When Jim Cairns, Australia’s Deputy Prime Minister under Gough Whitlam, his personal assistant Junie Morosi, David Ditchburn and others in the mid Seventies began preparing the first ConFest - short for ‘conference-festival’, Jim Cairns and his group chose to meet in the Church Hall next door to Neville’s Community Mental Health Centre in Paddington.[2]

The first ConFest took place at Cotter River supported by many groups and energies. The success of ConFest spawned festivals and gatherings in every state and territory of Australia. DTE entities were set up through Australia and all joined a loose group called the Australian Down to Earth Network or ADTEN. DTE Cooperative (Victoria) is the only DTE group that continues the ConFest tradition.

How did Dr Cairns know about this Paddington commune? These were a core group that helped put on the Aquarius Festival in 1973 in Nimbin. They had also put on a series of festivals between 1968 and 1973. A key figure in all of these festivals was Dr Neville Yeomans,

Yeomans had founded an eighty bed experimental mental health unit in 1959 called Fraser House that was on the grounds of the North Ryde Psychiatric Hospital. This unit was extremely eclectic in exploring ‘community’ of a particular kind as THE process for returning to functioning well in the social life world. After a number of months, this unit was so successful that dysfunction folk with small (less than 5) family friend networks were leaving Fraser House within 12 weeks of arrival functioning well, with a functional family friend network of between 50 and 70 people!

In commencing this unit, Neville said that he was exploring ways of creating networks of people that could support the evolving of a new epoch on Earth. In his view, the very best people to start with were the people on the very edges of society as these had had ‘’society knocked out of them.

Neville is recognised as one of the pioneers of therapeutic communities.

ConFest and the Next 250 Years

Back to the Top